Everything You Need to Know About Playing Online Scratchcard Games

What is a scratchcard?

Before we consider two virtual scratchcard games, Frogs Scratch and Raid the Piggy Bank, let’s consider the structure and function of a scratchcard, both virtual and paper-based.

The Cambridge Dictionary describes the original scratchcard as a “small card that you can buy to try to win a prize, with a thin layer that you rub off in order to see if you have winning numbers on it.”

These paper-based cards can be bought at a number of land-based, or brick-and-mortar locations, including grocery stores, smoke shops, and other convenience stores. These retailers have lottery terminals allowing customers to purchase one or more scratchcards and to check whether they have won anything almost instantly after having purchased the scratchcards.

In summary, playing scratchcards is simple. The process starts with deciding what type of scratchcard you want. There are a variety of prizes on offer, from a dollar upwards. Cards also have fun themes such as cartoon characters or current holidays. And choosing a card from these themed sets is part of the fun.

Once you have selected and paid for the scratchcard, the final step is to scratch off the waxy layer coating to see whether the theme-specific winning pattern is under the layer of wax. Finally, some scratchcard games offer prize multipliers that make the game more exciting and even lucrative.

Online scratchcard games and how to play them

Virtual scratchcard games are similar to paper-based scratchcards, except you have to sign up with an online casino or government lottery commission website to play. Once you have registered and funded your bankroll, you can select the scratchcards you want to play and pay for them.

As an aside, scratchcards are often found as part of the online bingo room ecosystem as an enjoyable way to pass the time while waiting for the next game to start.

Secondly, online scratchcard designers like Hacksaw Gaming design and develop virtual scratchcards to resemble the paper-based version as much as possible. Players use the laptop trackpad or computer mouse to each panel to “scratch the top layer off” to reveal the symbol underneath.

Virtual scratchcard games have the benefit of utilizing the functionality that, when clicked, simultaneously displays all the symbols that determine a win or not.

Finally, some online casinos and lottery sites have an option, allowing gamers to automatically play ten or more scratchcard games, one after the other.

Each game’s paytable is different.

And some games include additional elements like multipliers, free games, and mini-games.

Now that we understand the theory behind both paper-based and online scratchcard games let’s look at the two virtual games cited above.

This scratchcard game is designed and created by game developers at Hacksaw Gaming. It is a reasonably new game with a unique and eye-catching style.

As described above, scratchcard games are simple to play. They are loaded with fun animations, crisp graphics, and lively soundtracks. Most modern scratchcards games are based on a 3 x 3 grid. Frogs Scratch is no different. When you select to play a new game, a grid of 3 x 3 green frogs appears on the screen. 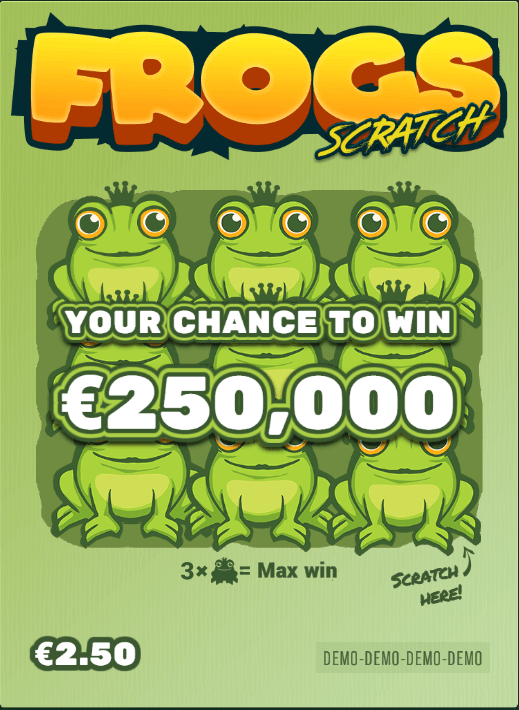 The aim is to either select the option where the symbols underneath all 9 green frogs are simultaneously revealed, or you can use the virtual eraser to “scratch” away from the green frog from on top of each cell in the grid.

The rules are simple.

This game’s paytable reveals that the RTP (Return to Player) value is 65.27%. In other words, just over 65% of all income generated by the game is paid back to the players. Therefore, for every €2.50 game played, €1.62 is paid into the players’ prize money pool.

Note: This does not mean that each player will get back 65% of their total amount spent playing Frogs Scratch. This 65% is paid into the full prize money pool, and the random generator generates the number sequences for every game. When 3 of the same symbol appear together, the prize is paid out of the collective pool.

It is essential to note that it follows the general format of most other virtual scratchcard games at the outset. However, its differences are as follows:

As described above, both paper-based and online scratchcard games are simple and loads of fun to play. The games, Frog Scratch and Raid the Piggy Bank, are two examples of how all of the virtual games in this genre are structured; thereby, making it easy to move between games without learning new and potentially complex game rules.