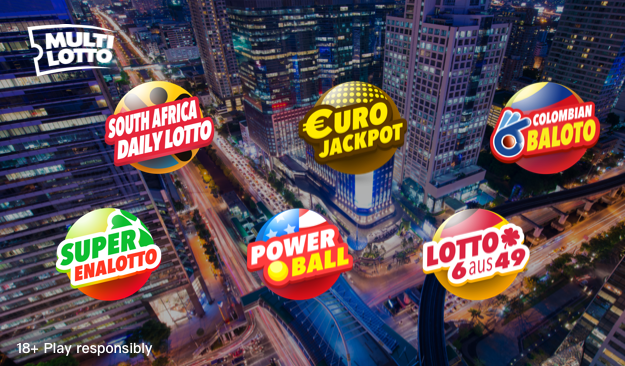 Winning the lottery is for most players the biggest dream. You hear about incredible jackpots all the time and lucky winners that can’t believe they just won. But, did you know that it doesn’t have to cost you a fortune to win one? We have gathered the cheapest lotteries with the biggest jackpots to this date!

Bet on the outcome on all these lotteries with Multilotto – you are only one click away from grabbing the big jackpots!

Powerball is world-known on the lottery scene and one of the most popular lotteries in the world. What started in April 1992 in the US, quickly spread all around the world due to the size of the jackpots of this game.

In January 2016, lottery history was rewritten when the Powerball jackpot went up to an incredible €1.250 948 000! This high amount was split between three winners.

What are the rules of Powerball?

To play a game of American Powerball, you choose five main draw numbers between 1-69 to bet on, and an additional bonus number between 1-26, known as the Powerball. After choosing your lucky numbers, you just wait to see if you are one of the fortunate winners!

A Powerball ticket for a draw is €3.50 with Multilotto. And with a boosted €6 ticket,  the Powerball jackpot could reach an astonishing €353 million!

Eurojackpot is one of the biggest, but also one of the most competitive lotteries you can find in Europe.

This great lottery only cost the players €2.50 per line on the Multilotto website, but it can generate some huge jackpots!

What are the rules of Eurojackpot?

There are 12 prize categories, so you still have great chances of winning even if you can’t match all the numbers. The average jackpot for this lottery is €10 million and the highest ever jackpot of €90 million has been reached a couple of times, but the first one to win it was a ticket holder in Czech Republic in May, 2015.

SuperEnalotto is well-known among all the Italians in the country. What makes this lottery so special is that the jackpot has no rollover limit, which means that the prizes can reach up to 9 digits. Not too bad for a game that only costs you €1,50 per line!

What are the rules of SuperEnalotto?

To play SuperEnalotto, players pick 6 numbers between 1-90. To win the jackpot you need to get all the 6 winning numbers in a draw. You can complete with as many entries as you’d like before you sit back and wait for the results. The draw takes place three times per week, Tuesdays, Thursdays and Saturdays.

There is no maximum SuperEnalotto jackpot, but the upcoming jackpot of €32.7 million is not too bad. These jackpots are one of the reasons for the lottery’s great popularity. SuperEnalotto holds the jackpot record among European lotteries with one single ticket holder collecting €209.1 million in August, 2019!

Colombia Lotto or Colombia Baloto as the lottery is known for in its country is Colombia’s leading lottery, offering huge jackpots for their players. One draw cost as little as €1,50 on Multilotto!

What are the rules of Colombia Lotto?

The rules of Colombia Lotto are easy, each player picks 5 numbers between 1-43. You also choose a bonus number between 1-16. If you can match all 5 main numbers along with the bonus number, you win the jackpot.

You can also join special draws, called Revancha, or rematch for a chance of a significant amount of cash!

South Africa Daily Lotto - The biggest lottery in the country!

South Africa Daily Lotto is one of the big South African Lotteries and has become a national treasure. One great advantage of a daily lottery is the fact that they don’t cost very much.

To bet on the South Africa Daily Lotto you only need to pay €0.20 for one draw and great chances of winning.

What are the rules of South Africa Daily Lotto?

Playing on the South Africa Daily Lotto, the only thing you need to do to play is to choose five numbers between 1-36 and pay for your entry. The jackpot is yours if you can match all five numbers with the five balls that are drawn.

You can also go home with some smaller prizes if you can match 4, 3, or 2 out of the five numbers. When you bet on the South Africa Daily Lotto, you’re playing for some very nice prizes.

There is no set jackpot on the South African Daily Lotto, but the average jackpot is worth around €20,000.  The highest jackpot in the national lottery to this day is a mind-blowing amount of €11 532 350!

Lotto 6aus49 – The most popular lottery in Germany!

Lotto 6aus49 is a German national lottery that had its first draw back in 1955. It has since then become Germany’s most popular lottery and is also known for giving out some of the highest jackpots in the country.

The draw takes place two times per week, every Wednesday and Saturday and you can find the results easily on Multilotto’s website or app. The best part? The ticket for this lottery is only €1 per line!

What are the rules of Lotto 6aus49?

To play Lotto 6aus49, you choose 6 numbers in a pool of numbers between 1-49. The jackpot goes to the lucky person that can match all 6 numbers. One bonus number is also drawn in the 6aus49 lotto and is used to create additional prize pools for more players. The second runner up in this lottery is the player that can match 5 of the main balls and the bonus ball.

The largest ever jackpot on Lotto 6aus49 until today was drawn in December 2007 and had a prize pool of €45,4 million and was shared by three ticket holders. The average jackpot for this German lotto is €8 million! Don’t miss out on your chance to win it big.

There you have it, the 6 cheapest lotteries to this day – which one are you going to bet on?

Join the Group Game to Optimize Your Chance of Winning