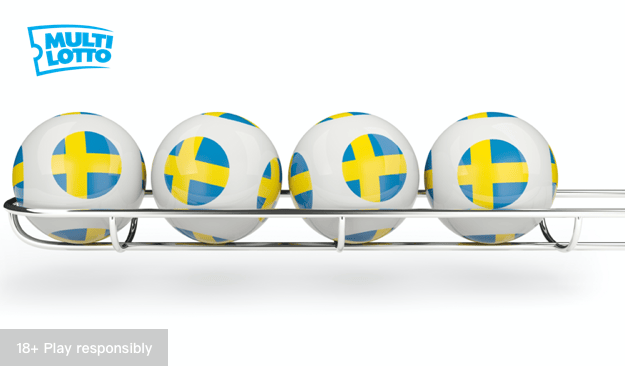 Besides being one of the world's biggest exports in music, the Swedes also love a round of lotto. Ever since 1997 when Svenska Spel, a state-owned company operating in the regulated gambling market was created, the love for lotteries has exploded on the Swedish market.

Today there are a whole bunch of online games that the Swedes get excited to bet on. We’ve found and gathered the top 5 lotteries in the country! At Multilotto you can bet on the outcome of these lotteries and try out your luck for the big jackpots!

For Swedes, a lottery is more than just a game. It’s become weekend events where friends and family gather together for the draw over a glass of wine and some good food. This is why Swedes have a soft spot for the lottery world. Today there are plenty of games you can easily bet on online – just take Miljonlotteriet as an example, Sweden’s second-largest lottery with approximately 250 000 unique players!

Don’t have time to take part in the draws? No problem. On Multilotto you can bet on the outcome and see the results directly on the website or the app as soon as the results are in. A pretty easy way for a chance to have fun in lotteries!

The first Eurojackpot draw was back in 2012 and in just a couple of years, this lottery has expanded to 18 participating European countries that are in it to win it. Eurojackpot started as an alternative to the popular game of Euromillions, and was created to have a lottery that paid out winnings more frequently. On one hand, this created fewer super high jackpots, but on the other, it has more frequent jackpot wins.

The draw takes place every Friday night in Helsinki, Finland which along with Germany has the most participants in the Eurojackpot lottery.

How to play Eurojackpot

The second runner up is the player who can match all 5 main numbers and 1 of the bonus numbers. In Eurojackpot there are 12 prize tiers and it cost as little as €2.50 for a single ticket.

2. Postkodslotteriet – The largest lottery in Sweden!

The Swedish lottery Postkodslotteriet differs from many of the established lotteries out there. Their unique format is one of the reasons why it has attracted so many players in Sweden. Today, Postkodslotteriet is the largest lottery in the country with new players entering every day.

By playing Postkodslotteriet you have the chance to win money for yourself and your neighbors. You also fund non-profit organizations throughout the country. Postkodslotteriet had its first drawback in 2007 and has helped nearly 500 different projects and gathered approximately €117 000 000 for the non-profit sector.

The Swedish Portkodslotteriet has the same format as other zip code lotteries around the world, meaning that the game sells subscriptions instead of tickets. Participants pay a set amount every month and are automatically entered into a daily and monthly draw which uses area zip codes to find a winner. That’s the reason behind the name Postkodslotteriet. If your zip code is chosen, you and the subscribers in the same zip code will receive prices.

The Swedish Postkodslotteriet has become a huge deal in the country where around 10% of the country's population play the game. It also receives a lot of TV coverage where a presenter drives around Sweden to hand out checks to surprised winners.

3. Vikinglotto – The Nordic and Baltic lottery!

Euromillions might have a bigger reputation in the world of gambling today, but Vikinglotto was actually the first transitional lottery in Europe, founded back in 1993. Nine European countries are members of this traditional lottery today – Sweden, Finland, Iceland, Norway, Denmark, Latvia, Estonia, Lithuania and Slovenia.

As with most of the lottery games, you need to be at least 18 years of age to enter the game of Vikinglotto, but you do not need to be a resident in any of the participating countries to play. By using the Multilotto site or app, you can join the exciting world of Vikinglotto in an instant!

4. Powerball– The most famous lottery in the world!

Powerball hardly needs an introduction as it’s one of the most popular lotteries in the world. The first draw took place in April 1992 in the US with a jackpot of approximately €1 700 000. With a huge jackpot like that, Powerball quickly got the attention of millions of Americans who started to participate in every draw.

In January 2016, the Powerball game changed drastically, when the jackpot went up to an astonishing €1 270 486 000 and was split between three winners. Until this day this jackpot is the largest in the world!

How to play Powerball

To play Powerball, choose five main draw numbers between 1-69, and 1 additional bonus number between 1-26, also known as the Powerball. To win the jackpot you need to match your 5 main numbers, plus the Powerball.

To bet on the outcome of Powerball, you pay €3,5 on the Multilotto platform and once the results are in, you can check if you’re one of the lucky winners! If you want to win it big, Powerball is the lottery for you!

Miljonlotteriet is one of Sweden's oldest lotteries, founded in 1964. It’s a company owned and incorporated in the charity organisation IOGT-NTO, and Miljonlotteriet has contributed a surplus of approximately €155 660 to the non-profit work of IOGT-NTO over the last 15 years.

Even though Miljonlotteriet has over 50 years of experience in lotteries, the sales have more than doubled over the last ten years. This lottery was also the first to offer subscriptions to scratch ticket players. Today, you can choose either to be a subscriber or to buy tickets directly from retailers and to play scratch tickets and bingo online.

The prize is given out 50% in cash and for the other 50%, the player gets to choose from Miljonlotteriet’s exclusive prize items. This is one of the most traditional and fastest ways to play a lottery game either online or on scratch tickets in the comfort of your own house!

So, are you ready to try out something typically Swedish that isn’t meat balls or design furniture? These five lotteries are a great place to start exploring the Swedish betting world!