From Bitcoin to Ethereum and Dogecoin to SHIB, there are now tons and tons of cryptocurrencies out there. While some of these cryptocurrencies yield an astonishing return as high as 9000%, a few of them don’t seem to rise beyond our expectations. Therefore, if you are also planning to invest in cryptocurrencies, then you must do your bit of research. The article will let you know about some of the most promising cryptocurrencies of 2021 that are worth exploring.

The Exponential Rise of Dogecoin in 2021

Dogecoin has to be one of the most prominent cryptocurrencies, which has made headlines the world over in 2021. It might sound surprising, but the cryptocurrency started as a joke and is still considered a “meme coin” by many.

Ideally, the cryptocurrency was launched by Jackson Palmer and Billy Markus in 2013 as a satire using the popular doggy meme as a logo. While the cryptocurrency had negligible worth in the starting, it witnessed a whopping growth rate of around 9,228 percent this year.

However, Dogecoin was later made popular by Elon Musk and his appearance on Saturday Night Live. The cryptocurrency was also backed by celebrities like Snoop Dog and other internet powerhouses.

At the time of its release, one Dogecoin was worth just 0.00154 USD. Today, one Dogecoin is worth around 50 cents, which depicts the rise of around 32,000% in its valuation in the last 6 years. 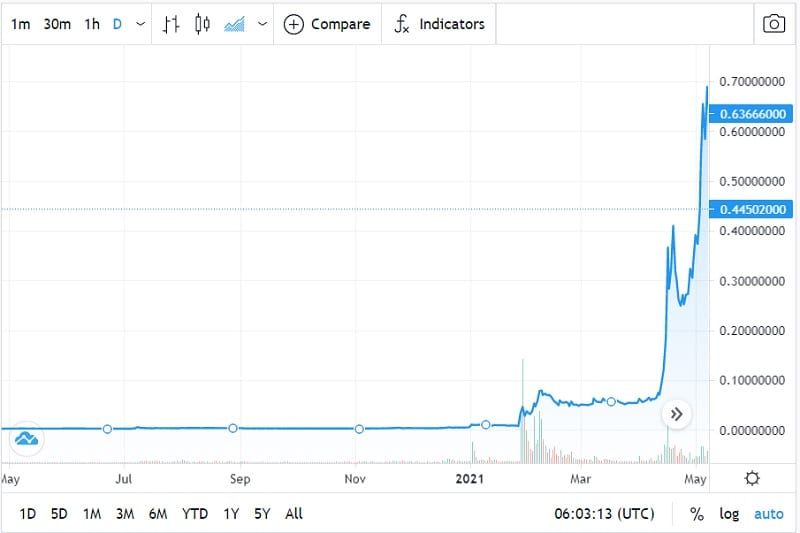 Unlike other stable cryptocurrencies, Dogecoin remains a “meme coin” and there are no centralized authorities to provide a stable regulation. While there are infinite possibilities with this cryptocurrency, we recommend being a bit cautious and not investing a big amount in it as of now.

SHIB: The New Promising Cryptocurrency on the Block

Commonly known as the Dogecoin Killer, Shiba Inu is the latest meme cryptocurrency that is providing exceptionally good returns. As the name suggests, the cryptocurrency is inspired by the dog breed and was introduced in August 2020.

The currency is managed by ShibaSwap, which is a decentralized peer-to-peer network. Even after months of the currency’s introduction, it didn’t cost much and was evaluated as around 0.000029 USD in May 2021.

This drastically boosted the marketing trading value of SHIB by around $500 million. As of now, it has a value of $8 billion and the worth of one SHIB coin is around 0.000019 USD. While it is not as high as other major cryptocurrencies, it has certainly shown a lot of growth lately. 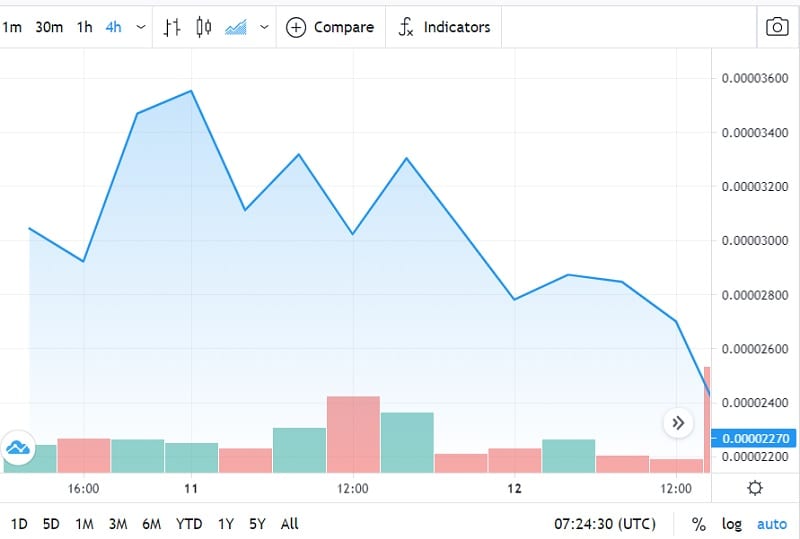 Just like Dogecoin, Shiba Inu is another meme cryptocurrency that can perform well in the coming days. Recently, Vitalik Buterin has donated $1 Billion worth of SHIB to Covid Relief funds that have dropped its evaluation a bit. You can still try your luck at this new cryptocurrency but should not be too certain about a high return.

How Safe it is to Invest in Cryptocurrencies?

Ever since the rise of huge cryptocurrencies like Bitcoin and Ether, more and more companies are accepting them as a mode of payment. For instance, do you know that you can now buy a brand-new Tesla via Bitcoin?

Besides that, you can also find hundreds of other companies where cryptocurrencies are accepted. Some of these popular brands are Microsoft, AT&T, Subway, Burger King, Intuit, Zynga, Twitch, Virgin, and more.

You might already know that cryptocurrencies are known for their high returns in a short duration. Cryptocurrencies like Bitcoin, Litecoin, Ether, and SHIB have shown tremendous growth in the last few years.

One of the best examples is Dogecoin that has shown a whopping increase of 32,000% ever since its release. This means if you had invested just $1 in Dogecoin around 6 years back, you could have had around $32,000 by now!

While there were some apprehensions a few years back, several companies and even governments have now backed cryptocurrencies. You might already know that companies like Tesla, Square, Microstrategy, etc. have invested billions in Bitcoin and other popular cryptocurrencies, making them more reliable than before.

Not just that, even governments of numerous countries like the USA, Canada, Germany, Japan, France, etc. have now made cryptocurrencies legal. A while back, it was even reported that the UK is coming up with its native cryptocurrency, Bitcoin.

Another prominent factor behind the rise of cryptocurrencies is their transparency. Unlike other currencies, they are not controlled by a central authority and are based on a peer-to-peer network instead. This makes it extremely easy for the public to invest, transfer, and withdraw them.

Almost all the major cryptocurrencies go through a “halving” process. For instance, every 4 years, the rewards allocated for mining Bitcoin would be reduced to half. This means the valuation of these cryptocurrencies would automatically be improved over time with their regulated stock-to-flow ratio.

When we talk about some of the most rewarding cryptocurrencies, Bitcoin and Ether have to be the two prime candidates.

Bitcoin is the most popular and strongest cryptocurrency that was launched by Satoshi Nakamoto in 2008. With more than 60 million users worldwide, the cryptocurrency is based on a peer-to-peer decentralized network.

As of April 2011, one Bitcoin was worth only around $0.01. This gradually changed as the cryptocurrency saw an unexpected range of investments from companies and individuals. Currently, one Bitcoin is worth more than 50,000 USD, making it one of the most rewarding cryptocurrencies. Not just that, Bitcoin is now also accepted by PayPal and other gateways as a supported mode of payment. 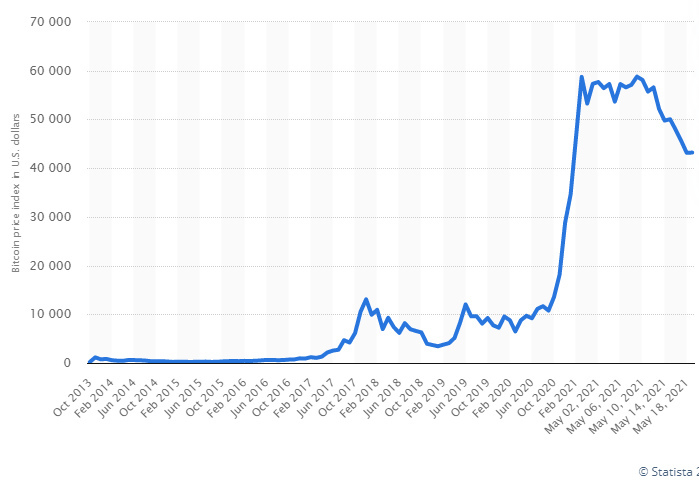 Ether, which is based on the Ethereum network, is another community-driven cryptocurrency that has gained its value in the past. The network was created by Vitalik Buterin in 2013 and was developed for crowdfunding the next year.

Compared to Bitcoin, Ether provides an added feature of automated agreements, which lets us create smart contracts for our transactions. This makes it easier for us to invest and transact in Ether across different platforms.

As of now, even Visa supports the transaction in Ethereum with over 45,000 payments made per second. Although one Ether was worth around $100 till 2018, it witnessed unexpected growth and is presently worth more than $4000. 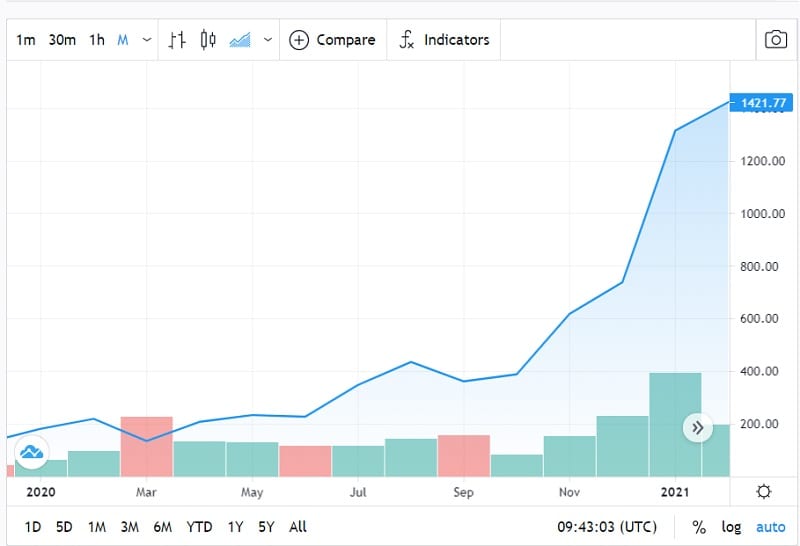 If you want to build up your wealth with cryptocurrencies, then consider trying your luck at the Bitcoin Jackpot at Multilotto.

The lottery takes place every Tuesday to Sunday (6 days a week) and is extremely beginner-friendly. You just have to pick 6 random numbers from 1 to 49 while getting your Bitcoin jackpot ticket. If your ticket would match all the lucky numbers, then you can win its highly rewarding jackpot of Ƀ100.

You can get a single ticket of the Bitcoin Jackpot at just $3 and can get multiple lines if you want. The best part is that you can buy your Bitcoin Jackpot lines from anywhere in the world via Multilotto and would get your winning amount directly transferred to your account.

Other Popular Cryptocurrencies to Look out for in 2021

Besides Bitcoin and Ether, you can further consider exploring the following cryptocurrencies.

Tether is a utility cryptocurrency that is designed to make payments on different mediums simpler. It was originally named “Realcoin” and was first introduced in 2014. It is now used by numerous American companies, making it quite stable.

Binance coin is based on Ethereum tokens and is managed by Binance Exchange. The cryptocurrency was launched in 2017 and has gained immense popularity due to its secure mining. The currency is based on the auto-depreciation of 20% to make sure its price would be regulated. Though, unlike other cryptocurrencies, this one is managed by a central authority, Binance Exchange.

Litecoin was released in 2011 and is an open-source peer-to-peer cryptocurrency that has a significant market cap. A lot of people consider it a lighter version of Bitcoin that is recommended for small investments. In 2013, one Litecoin was worth around $3, which has now escalated to more than $300, making it an extremely rewarding investment.

There you go! We're sure that after reading this post, you would be able to know about some of the most popular cryptocurrencies in 2021. While Dogecoin and SHIB have made the headlines, currencies like Bitcoin and Ether have proved to be extremely reliable over the last few years. You can consider investing in these cryptocurrencies and can even get your Bitcoin Jackpot lines from Multilotto to try your luck.